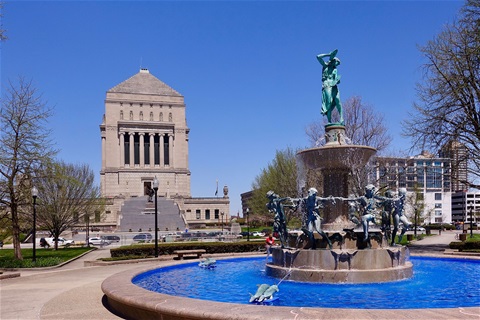 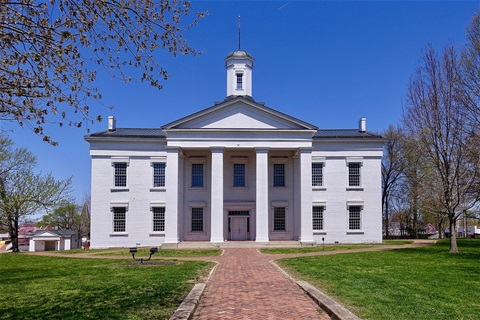 Today we visited St Louis. First, we took the tram up the Gateway Arch. Then we visited the Anheuser-Bush Brewery. Yes, we got some glasses of beer. On the way back to the RV Resort it was sunset time. I took the attached picture with the moon and the glowing windows. 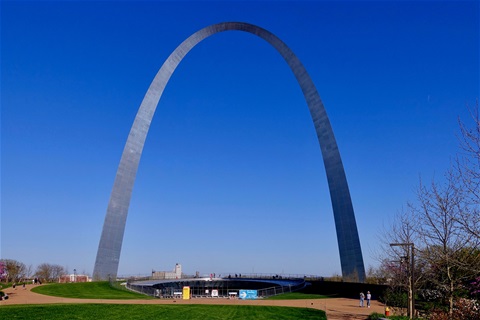 Today we traveled from Paducah in Kentucky to St Louis in Missouri (286 km). Most of the way we traveled in the State of Illinois. After arriving at the campground in St Louis we took a bus to see the Gateway Arch. This 192-meter high monument is very impressive. 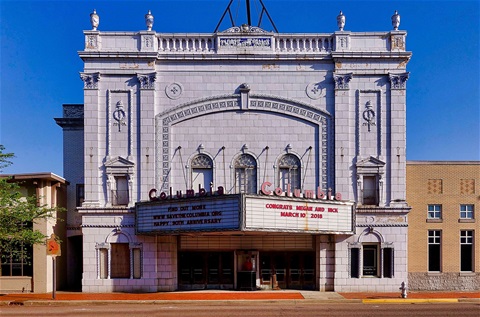 Today we traveled from Nashville in Tennessee to Paducah in Kentucky (216 km). In Paducah, we visited the National Quilt Museum. Paducah names itself the Quit City USA. Since Katharina made a lot of quilts we wanted to see the museum. It shows real beautiful quilts. Then we visited the historic part of the city. It lays at the confluence of the Tennessee River and the Ohio River. Many buildings are nicely rebuilt. Others need a renovation like the old movie theater I show in my picture. 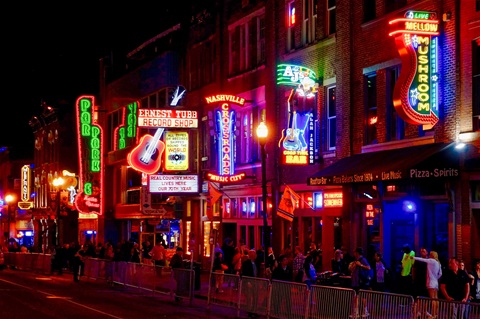 Today we visited the city of Nashville. We took a shuttle bus from the campground to downtown. All the interesting places for tourists are within walking distance. The main attractions are the music clubs, museums, restaurants, and shops on Broadway. The area at the Cumberland River is nice too. After dinner, we strolled along the music clubs to hear some music. The picture shows a section of Broadway. 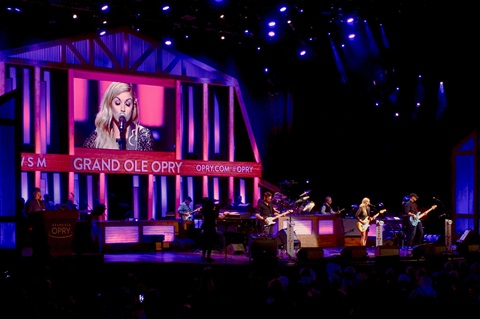 Today we stayed in Nashville while Peter and Theresia had to leave for an appointment in Toronto. It rained the whole day. We changed the campground and went shopping. In the evening we attended a show at the Grand Ole Opry. The following artists had an appearance: John Conlee, Lindsay Ell, Tommy Emmanuel and Jerry Douglas, Drake White, Bill Anderson, the Steeldrivers and Chris Young. In the picture is Lindsay Ell playing. Today we visited the Grand Ole Opry in Nashville. Since Peter and Theresia are here too we went there together. The picture shows us on the stage on the holy round wooden floor. It was a rainy and cool day today. Therefore after the Grand Ole Opry, we spent some time in an adjacent mall. 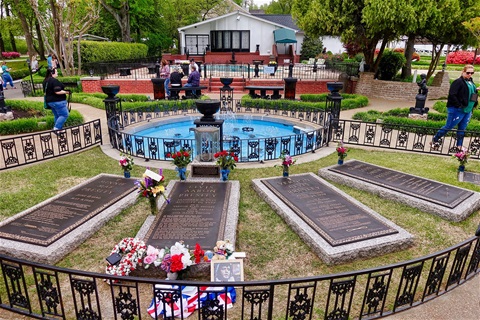 Today we traveled from Memphis to Nashville (365 km). It rained the whole day. Therefore I didn't take any pictures. Here is one from Graceland again. It shows the graves of Elvis, his parents and his grandmother. 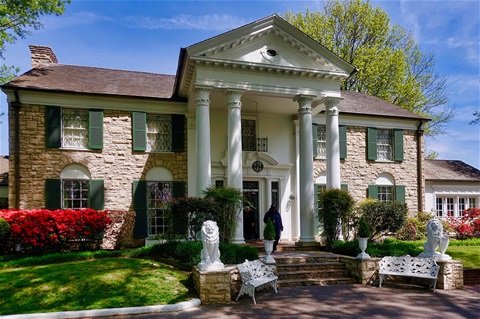 Today we visited Graceland the mansion of Elvis Presley in the afternoon. In the evening we went to Beale Street again. Tonight we went together with Peter and Therese. They are a couple from Switzerland which lived for over 30 years in Toronto and spend the winters now in Arizona at the same resort as Stefan and Edith. We met them there. By accident, we met them here in Memphis again. We had a nice dinner together at the B.B. King Blues Club. The picture shows the main building of the mansion of Elvis Presley. 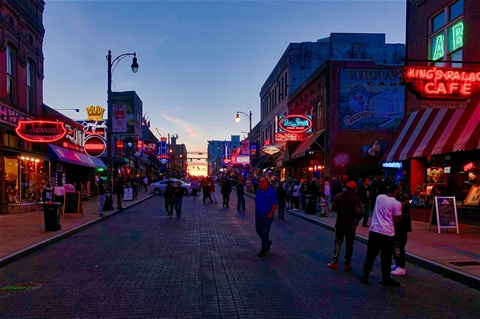 Today is a special day. This morning Rhea the wife of our son Oliver gave birth to their first son Tino Floris. With this, they made us grandparents! From far we wish the young family all the best and a lot of happiness. We traveled from Lake Village in Arkansas to Memphis in Tennessee (257 km). In the evening we celebrated at the Beale Street in Memphis.

Today we visited three places which are important for the birth of the blues music. This was first Greenville (31 km) where many older blues musicians come from. Second, we visited the Highway 61 Blues Museum in Leland (17 km). Johnny Winter grew up here and some other blues musicians. The third was at Indianola (26 km) where B.B. King comes from and where there are a B.B. King Museum and his grave. The campground we wanted to stay overnight didn't fulfill our requirements. Therefore we went back to the place we stayed last night. The picture shows a mural in Leland. 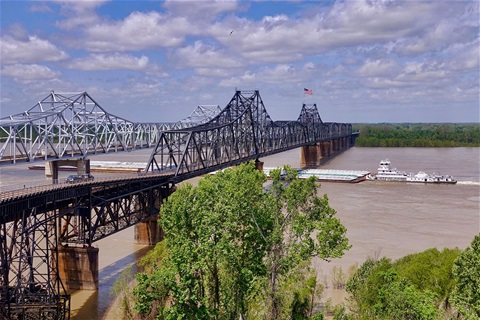 Today, finally we said goodbye to Vicksburg and traveled to Lake Village in Arkansas (138 km). We traveled on the Louisianan side of the Mississippi without seeing it. Then we entered Arkansas. Before we left Vicksburg we stopped before crossing the silvery bridge from Mississippi to Louisiana and did some pictures of the bridges. And we say a cargo boat passing the bridges as my picture shows. 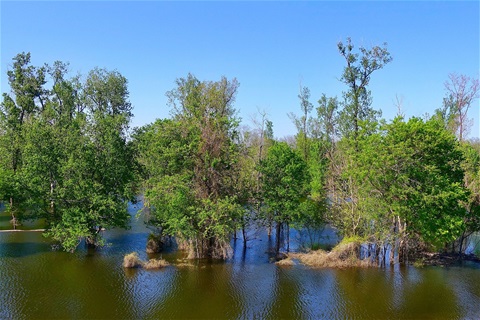 Today we brought the motorhome to the repair shop to fix the brakes. They worked from about 8 am until 1.30 pm until everything was finished. And it seems they did a good job. The brakes work better than ever. After this, we did a test drive to Eagle Lake (58 km). Everything worked well. The drive ended on a dam near the Mississippi River. The picture shows that the land there is flooded. This seems to be normal at this time of the year. 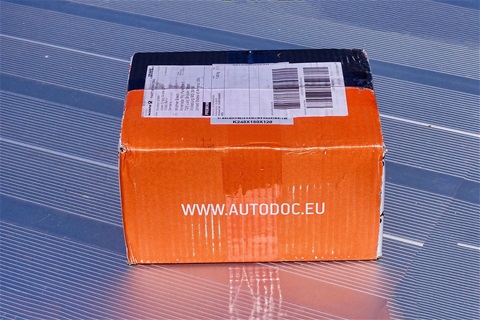 Today the parcel from Germany arrived after 11 days on the way. We went immediately to a repair shop which we searched for during the past days. They will repair our brakes tomorrow morning. We hope that it works out fine. 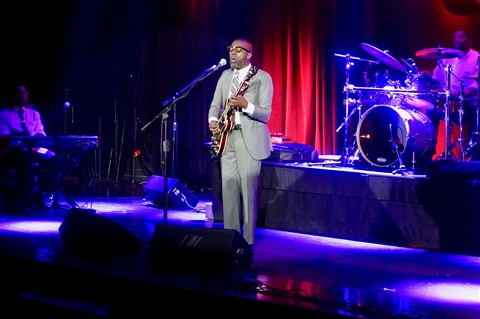 Today we had a lazy Sunday. We start to be used to do nothing! The picture is from the concert of Friday night. It shows Mr. Sipp. 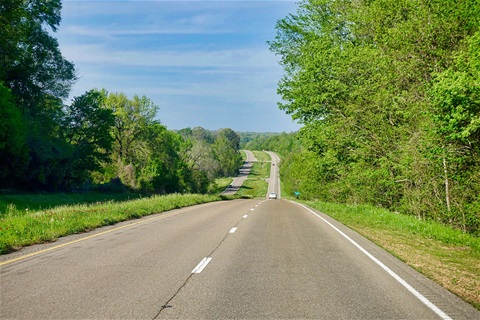 Today was a gray and rainy day. We stayed in our motorhome and worked on pictures and emails. We are now already two weeks here. And we wait still for a parcel to arrive. The picture is from our trip to Grand Gulf two week ago. It shows the highway 61 in the region of Le Tourneau. We didn't see so much green for a long time. 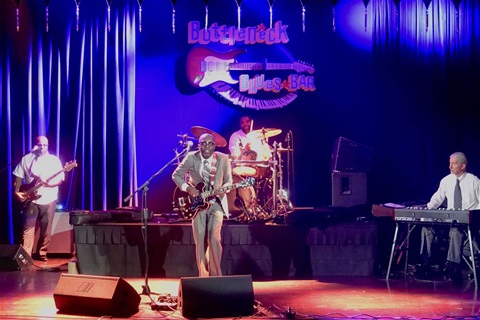 Today we stayed at the campground and waited for the parcel from Germany. But it didn't arrive. The campground we are staying at belongs to a hotel and casino resort. In the casino is a blues bar. Tonight Mr. Sipp and the Mississippi Blues Childs played. We went to watch and listen. I knew Mr. Sipp from a CD I have. Check him out on iTunes or where ever you listen to music. The picture shows Mr. Sipp and his band at the Bottleneck Blues Bar. 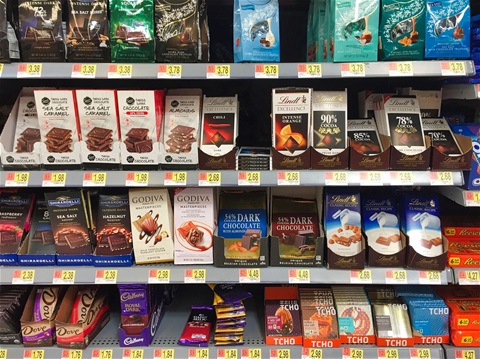 Today we stayed at the campground. As a Swiss, you need some Swiss Chocolate from time to time. In America, you can buy them even at Walmart. Here is a picture of the offer. There are 13 different flavors. Sometimes there are even more flavors in the offer. I like most the normal milk chocolate from Lindt on the right side of the second shelf board. 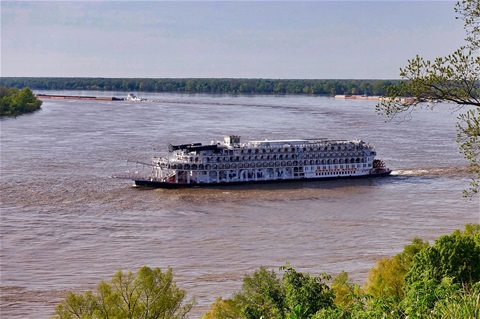 Today we went into the town of Vicksburg. We were astonished to see two Mississippi Cruise Ships at the port. We found out when they leave Vicksburg and went to our overlook point to see the ships passing by. The Mississippi River makes a 90° curve just before Vicksburg. On the picture, you see the curve, the cruise ship American Queen and two cargo ships. The American Queen sails southwards to Natchez and the others stream up toward Memphis. 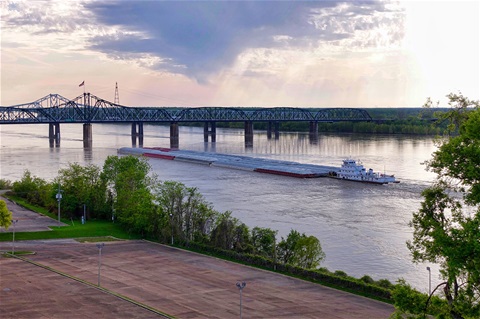 Today we stayed at the campground. We thought the parcel from Germany will arrive. But later we found out it just left customs in Miami today. We will see how many days they need to transport it to Vicksburg. The picture is from our walks to the Mississippi River of yesterday. The river is still used as a way of transportation. Huge barges are pushed by big tow boats up and down the Mississippi River as my picture shows. 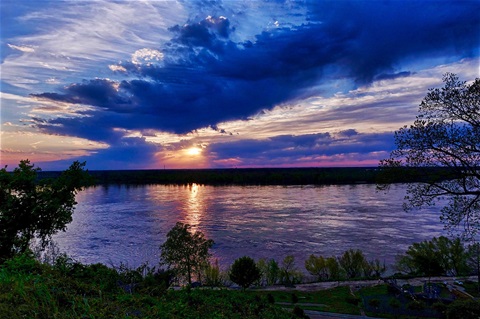 Today we stayed at the RV Park. It is about 100-meter linear distance from the Mississippi River. Today we went twice there to take pictures. The place I took the pictures lays nicely on a hill but there is always backlight. Therefore the pictures aren't that good. Here I show one at sunset time. 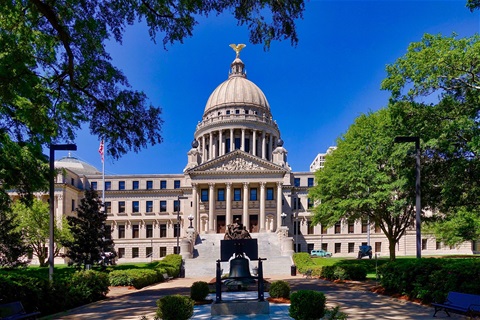 Today was nice weather again. We traveled to Jackson the Capital of the State of Mississippi (80 km). Here we visited the old and the new Capitol and some nice buildings next to them. The downtown area was almost empty of people. I think tomorrow on a working day this looks different. The picture shows the new Capitol of Mississippi in Jackson. It was inaugurated in 1903. 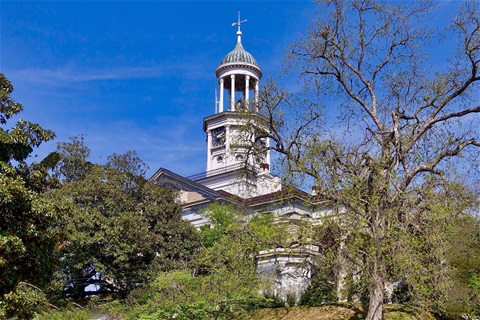 Today was a cold (5 °C) and rainy day. We stayed in our motorhome and did read and work on our pictures. The attached picture is from our trip to Vicksburg before yesterday. It shows the old Court House. 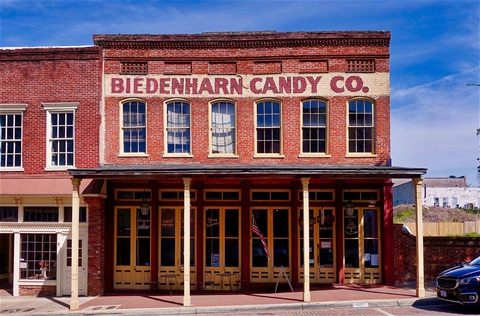 Today we stayed at the RV Park. Yesterday we visited the Coca-Cola-Museum. Mr. Biedenharn, a German immigrant, had a candy shop In Vicksburg. In the 19th century, it was common that a candy shop or a drugstore sold open drinks, which they produced from a syrup together with carbonated water. Coca-Cola was such a syrup too. But Mr. Biedenharn had the idea to sell not only in the city but in the countryside too. Therefore he started to bottle Coca-Cola in 1864. He was the first in the world to do this and opened with that a huge business. Mr. Biedenharn had seven sons. Almost all of them opened Coca-Cola bottling companies in the States of Mississippi, Louisiana, and Texas. The picture shows the building, where the bottling of Coca-Cola was invented. It's now a museum. 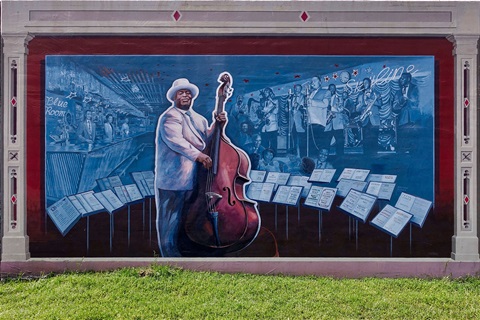 Today we visited the historic part of Vicksburg again. First, we studied the murals at the floodwall at the Mississippi. Here I learned that Willie Dixon was born here in Vicksburg. He is the composer of many blues songs, which were played by blues and rock musicians and bands. The picture shows the mural with Willie Dixon. He is not only a composer he played bass too. He was the bass player in Chuck Berry's Band. Therefore he is not only important for blues but for rock music too. 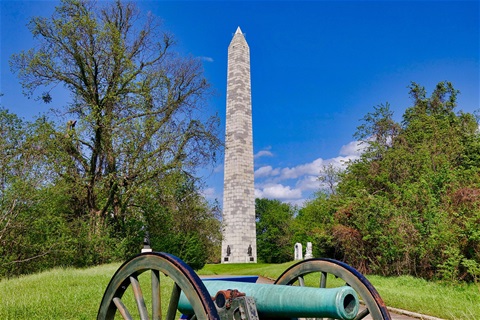 Today we stayed at the RV Park. The first parts of our brake repair project arrived today from Singapore. Now we wait for the second delivery from Germany. The picture is from our trip to the Military Park of yesterday. 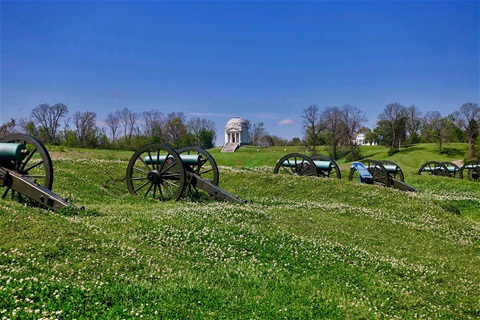 Today we visited the National Military Park here at Vicksburg. In the Civil War 1863, there was a big and important battle here at Vicksburg. Vicksburg was a strategic place to control the Mississippi River. The Union army wanted to have this control. General Ulysses S. Grant fought with 77'000 men against the 33'000 Confederate troops in the city of Vicksburg. The Union army was not able to win the battle because Vicksburg was secured by a hilly terrain. Therefore the Union army laid siege to Vicksburg for almost two months until the city had to surrender. The Military Park shows the history of the battle and siege and commemorates 2000 dead and 6000 wounded soldiers. 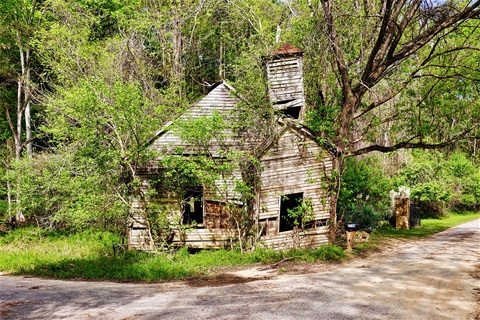 Today we stayed at the campground and did some chores. The picture is from our trip of yesterday to Grand Gulf. This house stands just 100 meters await from the stilt house. Maybe it was damaged in a flood and since then deteriorates. We wait here in Vicksburg for the brake parts from Europe and Singapore. We hope they arrive here until Friday. 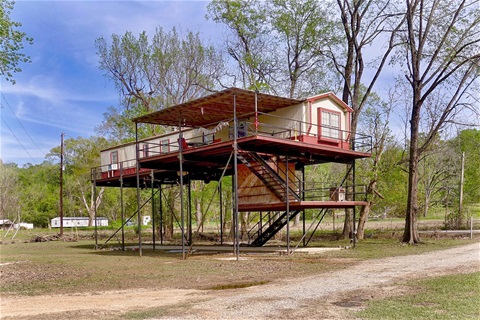 Since my bank introduces a new software over Easter I can't do my obligatory office day. We, therefore, drove south along the Mississippi River. From the road, the river can't be seen. Therefore we drove two times on streets which led to the river. We ended up in Grand Gulf (48 km). There we saw this house on stilts just 10 meters away from the water. Would you like to live in such a house close by the Mississippi River?